On November 8th, the “2019 Eighth Listed Company’s Summit” hosted by China’s Daily Economic News took place in Chengdu. As one of the most valuable activities in the industry, the forum has become an important exchange for investors and listed companies in China. Each year, the best listed companies are selected for praise in various categories. This year, YOOZOO won the “Most Socially Responsible Listed Company” award for its active implementation of social responsibility and outstanding contributions in the field of public welfare.

As a listed company with a sense of social responsibility and mission, YOOZOO actively assumes social responsibility for its employees, users, industry and society, creating quality products, inheriting and spreading cultural traditions, advocating positive values, and actively participating in building a healthy and sustainable industrial ecology. In addition, YOOZOO has established a charitable foundation (the YOOZOO foundation) to carry out activities for youth cultural education and help and rescue, and combined with its own strategic resources, launching environmentally-themed interactive products to help encourage a green and healthy society. 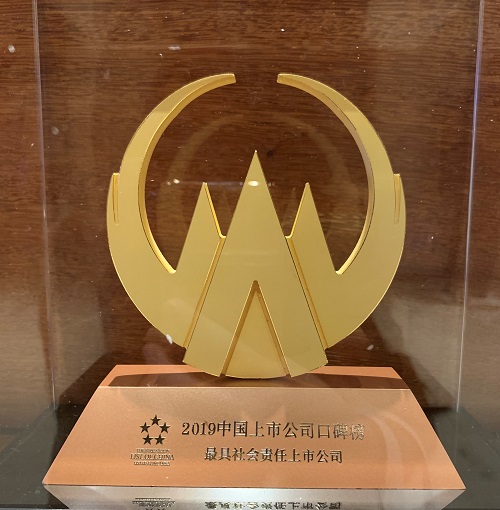 Inheriting Cultural Traditions and Expanding the Value of Games

As a leader in the cultural and entertainment industries, YOOZOO has been committed from the start to bringing gaming products which combine simple joy with a positive interface and with high cultural value. By enriching the intrinsic cultural values of the game, the game’s value expands exponentially.

In order to present Chinese traditional culture in a deeper and more meaningful way, YOOZOO has set up a specialist cultural research team to fully present the classical essence and internal connotations of the relevant games. It has continuously integrated traditional culture and oriental philosophy into the game works, enriching the cultural connotation of the works and indeed the very value metrics themselves.

YOOZOO’s "Junior Three Kingdoms" and its derivative works are drawn from the Chinese classics, with the traditional stories and spirits interpreted in a contemporary way. Another, "Thirty-six Stratagems", integrates the traditional laws of warfare, and the chaos of the dynasties throughout various periods of Chinese history. For the background of the story, players experience the grandeur of the ancient Chinese wars. In addition, the upcoming "Mirage in the Flower", integrates travel adventure elements, exploring ancient Chinese mythology stories, and interpreting the fantasy of the ancient Chinese world. At the same time, through YOOZOO’s well-established global distribution network, such classic products with traditional Chineseliterature backgrounds have found popularity all over the world, promoting the spread of Chinese culture and values on a global stage.

YOOZOO has been actively responding to the Central Government of the People's Republic of China’s calls to strictly implement play-time and age-related regulations, having always regarded health as one of the most important aspects of corporate social responsibility. At present, all YOOZOO games have strict anti-addiction, sensitive word filtering and shielding systems to create a green and healthy game environment for users, and guiding young people to enjoy games in a healthy and happy way. happy.

In September of this year, YOOZOO actively participated in the construction of the age-reminder campaign on People's Daily Online, marking the corresponding age-appropriate level in the game’s home page and official website to improve the operational safety of the products and protect the physical and mental health of young players. At the same time, YOOZOO also implemented the "Online Parenting Monitoring Program for Online Minors", launching an industry leading parental monitoring platform to strengthen parental supervision of minors playing online games.

While promoting healthy, orderly and sustainable development in the games industry, YOOZOO has paid particular attention to social welfare undertakings and actively participated in public welfare activities. The YOOZOO Foundation has built a public welfare platform with the vision of “sharing happiness and guarding dreams”, paying attention to the growth and development of young people and their dreams. The Foundation is committed to becoming a practitioner, innovator and leading promoter of public welfare. In May of this year, the YOOZOO Foundation launched a book donation program to coincide with the Children's Day Festival, sending books to the foundation’s partner school – a primary school for the children of migrant workers’in Shanghai. In August, YOOZOOers formed a volunteer team, going out at weekends to create wall murals in the primary school, creating a new campus environment for the children before the start of the school. In October, the Foundation also invited teachers, parents and students to the Chinese Grand Theatre to watch a wonderful classical concert, letting the children feel the beauty of the music. Additionally, YOOZOO also donated 43,540 meals to the World Food Programme this year through the #GTarcadeHungerHeroes campaign.

YOOZOO also makes full use of the resource advantages in games to create educational-based game products. In the first half of this year, the eco-friendly WeChat game "Garbage Points" was launched in China, using games as a way to spread knowledge about garbage classification and sorting in China, using a more relaxed and entertaining way. Enhancing the public's awareness of environmental protection, the game showed the garbage recycling process from start to finish, with the end result being the re-birth of these materials in new products, giving meaning and a sense of accomplishment to garbage sorting.

In the future, YOOZOO will continue to keep spreading positive values as a mission, creating global entertainment classics, and continue to adhere to the social responsibility and enterprise development, and strive to bring better services to users and value for the society.

YOOZOO Games is a global entertainment company specializing in game development and distribution. The company is headquartered in Shanghai with offices in London, Berlin, Hong Kong, Singapore, and other major cities. Since its founding in 2009, YOOZOO has launched a multitude of highly successful products such as Game of Thrones Winter is Coming, Legacy of Discord – Furious Wings and League of Angels, and has forged a strong global distribution network.
Official Site http://www.yoozoo.com/
Global Game Portal https://www.gtarcade.com/
LinkedIn linkedin.com/company/yoozoogames